adminApril 2, 2015Adventures from the roadNo comments

Well my rig’s a little old,
But that don’t mean she’s slow.
There’s a flame from her stack,
And the smoke’s rolling black as coal.
My hometown’s coming in sight,
If you think I’m happy your right.

Ok music is the theme of the day, I am coming off a 2 week long rodeo run, so basically I have been listening to classic country nonstop. Excuse my lack of blogging it’s been a wild ride, last time I checked in we were returning from the Ripon Parade.
Not long after the parade I got some pretty exciting news, I am going to save it for another blog post, but lemme tell you it’s pretty awesome!

The next event we headed to was the Murphy’s Irish Days Parade this is possibly the wildest most exciting parade we ride in, it’s part parade part street fair! Though it’s fairly short route the entire street is jammed with people, vendors, and exhibits.

Luckily Mouse was stellar, our adventure started following the parade. On the way to the parade my truck was running kinda funny, after the parade it only seemed to get worse. We stopped to check the trailer, axels and such, everything looked peachy so we kept rolling.

Sadly things didn’t get better, I stopped again to check everything under the hood. Things got slightly comical when the hood got stuck open, using fence pliers and some ingenuity I finally got it closed and continued down the road.

Not long after we pulled back onto the road things went south. The left rear wheel decided to disconnect from the pickup.

Yep that’s right the wheel fell off my pickup. It went flying and almost hit the truck behind us, amazingly enough the driver of that truck ended up being a community response personnel. Two hours later the truck was loaded on the a tow truck and headed to the repair garage. Unfortunately it was after 5 on a Saturday, thank goodness for the Posse men as the owner of the garage opened it just for me.

After Reba was safe at the garage; the trailer, Mouse and I made our way to her home for the week. At that point I had to figure out how to get to work in the Bay Area with no wheels. I have the best friends ever as Kim drove a half and hour to pick me up then 3 hours back to my house. At 1 am exhausted but finally safe we relaxed and laughed at the events of the weekend.

The following day (which also happened to be my birthday) I spent a busy day relishing the fact that I was alive in one piece! In addition I realized that apparently my birthday is jinxed; exactly two years prior I blew a tire on my car.

A week later with the help of my wonderful friends I got back to miss Reba all repaired and ready to rock again. At that point Mouse and I had to go to our mock horsemanship competition. No big deal, not like she hadn’t sat for an entire week with no riding. But color me surprised when my sassy little spitfire was absolutely perfect.

After an uneventful trip back across the bay everything is right with the world now. I have a bit of time off until we are back at it with the Cowgirl Luncheon and all sorts of other fun things. But for now I am relaxing and trying to recover from the last adventure! 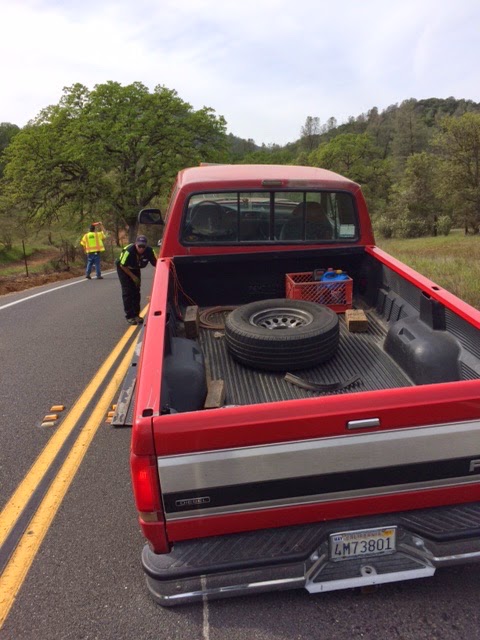