adminNovember 6, 2014Adventures from the roadNo comments

So I haven’t blogged in about 50 years, being that I am down from three jobs to two and in between competitions I have no excuse but mental exhaustion. Since half the blogging world (ok pretty much just L) has been harassing me here it is!

October has come and went, with the famous (or infamous) GNR under my belt yet again. This was possibly my best year ever, lots of family time, riding a ton, and just enjoying our first family competition in years. Competitively it was to my strongest but that’s how it goes.

First weekend we competed in the AQHA show, dad was 3rd in his division of Ranch Versatility and winning the halter class (his first show in about 8 years, Roo’s first ever). I just did Ranch Pleasure to get Mouse in the arena, she was quite sassy, but we managed a 5th.

I spent the entire week riding, like RIDING, two times a day a couple of hours each, Mouse got better and better but never lost her spunk. The highlight of the week was when we switched rides with our draft hitch neighbors. Dayna had the advantage of being a former reiner and making Mouse look good. I just bounced around on Miles and looked like a goof and realized those horses pull not ride for a reason.

After almost two solid weeks on the property and 4 rodeo performances down the day of the contest arrived.

The day began at 6 am with curlers, makeup, and about a can of hairspray in typical rodeo queen style

Interview was the first event up, I walked up through the rain, in my insanely stunning suit feeling pretty awesome till I realized I was the ONLY one in pants, but I rallied quickly. I ended up with 2nd in the order of go same as last year, which suited me fine. Nailed my interview and went on to speech.

We were all hustled into a sound proof room to wait. When I got onto the stage I was thrown off for a second when they said here’s the mic, but it doesn’t work. I went with it and made sure to present super strong to compensate. To my delight at end our impromptu was a mock radio commercial. Being that was my strongest event at Motherlode I was super stoked.

Then we headed off to ride; we were given one hour to complete our ride, a team penning was using the arena and they’d taken a lunch break. We were told do not waste any time, jog in and out, and just deal with the panels in the middle of the arena. Last minute someone had the sense to move the panels out of the way.

Mouse balks at the in gate which she’s been doing all week.. ummm no mare I do NOT need this, insert spur…  jog in, stop and settle … crap better not settle too long we are supposed to be fast….

start my spins…. one, two, four wait no that was two, yes ok three, four, hesitate…. crap I just did 5 spins… oh hell better rock the next four…


I went on my merry way and completed the pattern pretty dang awesome, and didn’t even have Mouse booger at the panels…

We went picked up the flag.. ok lets take this steady, last year I had to use the corner to stop… crap its a round arena this year, if she doesn’t stop poor Dom is gonna get run over…. Start flag run… cool ok this will work… finish flag run and hand flag back off to Dom, check to make sure he is outta the way…

I drop my hand and Mouse took off like a shot… it took a quarter of the arena for people to cheer cause they were so blown away… By the end chutes I checked her up and we finished with a very neat stop..

Needless to say I was feeling pretty awesome.. I was almost done and I had felt supremely confident and happy through out the whole contest… I even… gasp….. had fun! 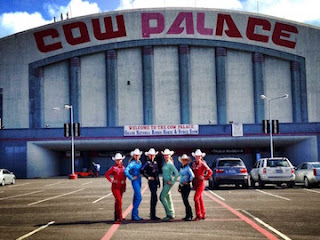 Last to go was our “mystery” category. We were taken to the vendor row to wait while they set up. We speculated what it could be,  “we’ve been scheduled for tv interviews maybe that?” one girl said “I hope it’s shopping here cause I can totally rock it” another joked.

Then one by one they called us and pointed towards a path out the door…. I wound my way down the hill, when I looked through the trees and spotted two horses standing in the arena and a slew of people in the stands I let out a little fist pump….

I walked in, they handed me a horse, and the judge said “You will complete your pattern again, you will have no warm up, the criteria remains the same, but you are allowed to adjust your tack.” Of course I opted to drop my stirrups, just eyeballing them told you my 6 ft frame wasn’t gonna cut it. I fumbled for a sec, then went to mount… This was a bit of a rocky venture, I am not the best at “correctly mounting” all pretty and queen like. Eventually I have to grab tack to get myself on but I wasn’t phased.

The spins started a bit rocky, but at least I did the correct number. I moved into my fast circles, I had to coax her along because I was used to Mighty Mouse jumping out fast. The transitions and flying lead changes went well. Something told me, this old girl had it in her.

So I pointed for my rundowns, dug a spur in, passed my marker and pulled out a deep whoa…. She slid about 15 feet…. I had to contain my excitement not to laugh or pet her right there….. I completed two more dropped the reins and gave her a huge pat….

I rode back over to the judges, dismounted slightly more gracefully and faced them.. “How did you feel, you enjoyed that didn’t you?” he said

“Yes sir, I rode on an equestrian team for 4 years, riding a draw horse is one of my favorite things ever.” They laughed and excused me…

I practically skipped over to visit my various groups of family and friends. They all congratulated me and offered other great words, the best was from my rodeo queen idol “you are a fucking badass,” she said. I almost cried, coming from the badass herself that was high praise.

We waited around, did what we needed to do and got ready for grand entry. For some reason I had an inkling feeling that the evening would not go well for me… That’s ok I thought…

Heading into grand entry I was nervous, but not for myself, one of my close friends and fellow queen, was borrowing our baby horse for the grand entry. This was Roo’s first grand entry, hell her first big event ever! From the alley I caught snippets of her ride, she wasn’t a dazzling seasoned rodeo pony like her sister, but she plodded through just fine…

For my own ride I knew loading in would be tricky because Mouse was gate shy all week. So I grabbed a friend on the ground and asked her to be on standby. Mouse was hyped but pretty good, we were a split second from the gate and whamm…

My bridle snapped.. Luckily my friend grabbed the reins threw it around her neck and they tried to jam it back together. I could see it wasn’t repairable… I had a split second thought (ok hopeful dream) Forget the bridle just run, she has a tiedown on so her head will stay close, why not… But I wasn’t sure if I could pull off the corner turn…

I screamed for Roo… Meanwhile the gate staff and announcer are calling for me.. I yelled to the girls waiting, GO! We grabbed the bridle off Roo, threw it on Mouse and literally breezed into the gate as he was closing it.

When I was in the middle I knew it was all done.. Call it women’s intuition or just fate. As they announced the results, my name was not listed under a single category. That was ok. I didn’t feel anything, I was just ok.

I was a bit upset later that evening, I called my friend who had already left. She told me all the right things and further solidified my thoughts that, it just happened. There was no explanation but it didn’t discount my day’s success.

I met with the judges and there has been all sorts of hoopla. They suggested to improve this or that.  Since then we have re hashed it a hundred times, perhaps I’m not the girl for the job, or I made some fatal error, what contest will I do next? For some reason I have never considered quitting.

But I keep coming back to my tv interview before the results had been announced. The calm in the eye of the storm. He asked me how I felt about the day, my response was simple

“There’s always something you wish you could’ve changed. But overall I am thrilled, I rode hard as I could and left it all on the arena dirt.”