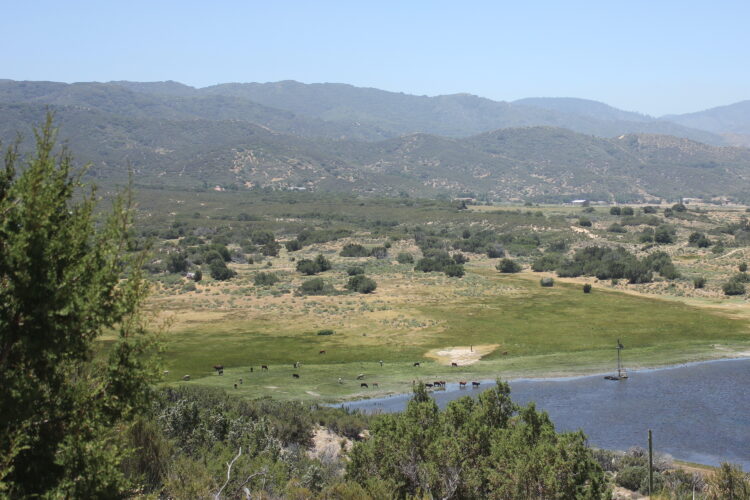 Now, after 70 years of teaching and performing valuable practices, including soil conservation and resource management, the Loma Prieta Resource Conservation District is forging ahead with the same dedication and innovation to support local farmers and ranchers.

As a member of the National Resource Conservation Service – a non-regulatory government agency – the LPRCD is tasked with aiding agriculturists in getting the most bang for their buck by exercising efficient resource practices conserving water, soil nutrients, and land.

During the LPRCD’s modest 70th anniversary celebration held Dec. 10 at the Gilroy Grange Hall, District 1 Supervisor Mike Wasserman praised the agency’s continued efforts to promote and educate the community on best conservation and sustainability practices. The LPRCD is “vital” to the area, he praised.

“I applaud the Loma Prieta Resource Conservation District’s longtime efforts to promote clean and efficient use of water resources and soil management,” he said.

In the past year alone, the LPRCD raised more than $1 million in grants for farmers and ranchers in Morgan Hill, Gilroy, and Hollister. The agency has helped provide services including ranch cleanup, education for farmers on water conservation, and soil testing to help maintain the most efficient fertilizer use.

The LPRCD considers itself a dual-purpose organization in that it works to obtain funding for conservation education programs and supports hands-on projects in the agricultural community. In 2011, the LPRCD secured a $50,000 grant to help a local farmer remove excess “green waste” – leftover branches, weed, and other organic material – that hindered the farmer’s operation.

The LPRCD also serves as a liaison between agriculturists and the government – writing grants and explaining reports – which can be overwhelming for the everyday farmer.

Farming isn’t the only resource that the LPRCD works to protect, as the organization assists the Santa Clara County Fire Safe Council with its wood chipping program.

But the LPRCD knows that it takes more than just funding to keep the wheels of agriculture turning. The agency also hosts the Speak Off and land judging competition, part of an effort to create the next generation of farmers among high schoolers.

The population that the LPRCD supports is extensive and includes individuals such as retired Morgan Hill rancher Bill Adams. He initially connected with the National Resource District branch in San Luis Obispo when he wrote his college thesis at Cal Poly.

“That was a good introduction, they were very helpful, and it was good knowing that the resource was available,” Adams said.

During his 17 years of cattle ranching, Adams never needed Loma Prieta’s guidance, but he knows the benefit of the resources they provide.

Adams added that LPRCD has “done a lot of good things; conservation can be costly.”

No group is too large or small to qualify for assistance, either. The agency has successfully secured funding for large-scale commercial operations and individual residents, including LPRCD board member Sandra Peterson, who came to the organization for guidance.

After moving to Gilroy more than 36 years ago, Petersen found it increasingly difficult to balance the costs of raising horses on her 10-acre ranch, where she also kept a few cattle.

The LPRCD assisted Petersen in working with the City of Gilroy to rewrite the city’s animal ordinance, making it easier to raise animals on small acreage. Loma Prieta also helped to educate Petersen and the City on the most efficient manure practices, thus saving time and money.

Petersen’s experience working with the LPRCD sparked a passion for getting involved with the organization. She explained that she became a board member around 12 years ago and even launched a new LPRCD course on manure management, called Stewardship for Small Acreage.

“A lot of my life lessons have come from Loma Prieta,” she said. “Now, to me, it just means a way to share.”

Unlike other conservation organizations, the LPRCD is not a nonprofit group. It is one of 3,000 National Resource Conservation Districts, which were specially founded by Congress in 1935 for soil conservation. The LPRCD began shortly after in 1942.

According to Loma Prieta Executive Director Susan Meyer, involvement in resource conservation districts began to drop in the 70s. She said LPRCD addressed this by widening their service base, focusing on other land and water issues.

Today, the LPRCD pairs with other organizations to help secure and provide the best possible resources for individuals and groups seeking help, Meyer explained.

“We all have different things we are bringing to the table. If we all work together, we can accomplish more,” she added.

For Meyer, the LPRCD’s 70th-anniversary celebration helped share with the community what the organization can provide to commercial agriculture operations and individuals alike. Meyer added that the Morgan Hill, Gilroy, and Hollister agricultural community members seek out LPRCD to help exercise the most efficient practices they can.

“There’s an interest in doing the right thing,” Myer smiled.