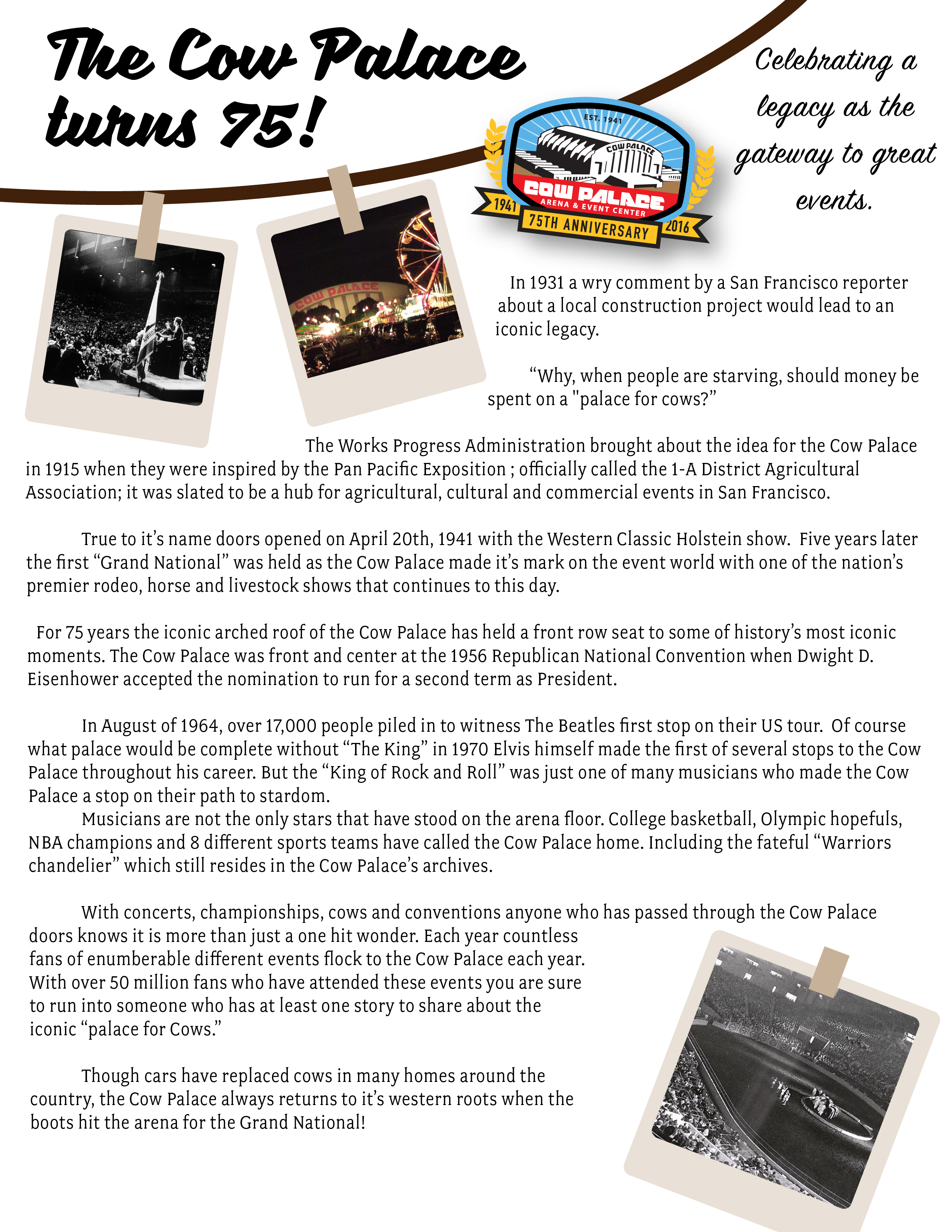 In 1931 a wry comment by a San Francisco reporter about a local construction project would lead to an iconic legacy.

“Why, when people are starving, should money be spent on a “palace for cows?”

The Works Progress Administration brought about the idea for the Cow Palace in 1915 when they were inspired by the Pan Pacific Exposition ; officially called the 1-A District Agricultural Association; it was slated to be a hub for agricultural, cultural and commercial events in San Francisco. True to it’s name doors opened on April 20th, 1941 with the Western Classic Holstein show.

Five years later the first “Grand National” was held as the Cow Palace made it’s mark on the event world with one of the nation’s premier rodeo, horse and livestock shows that continues to this day. For 75 years the iconic arched roof of the Cow Palace has held a front row seat to some of history’s most iconic moments.

The Cow Palace was front and center at the 1956 Republican National Convention when Dwight D. Eisenhower accepted the nomination to run for a second term as President. In August of 1964, over 17,000 people piled in to witness The Beatles first stop on their US tour.

Of course what palace would be complete without “The King” in 1970 Elvis himself made the first of several stops to the Cow Palace throughout his career. But the “King of Rock and Roll” was just one of many musicians who made the Cow Palace a stop on their path to stardom.

Musicians are not the only stars that have stood on the arena floor. College basketball, Olympic hopefuls, NBA champions and 8 different sports teams have called the Cow Palace home. Including the fateful “Warriors chandelier” which still resides in the Cow Palace’s archives.

With concerts, championships, cows and conventions anyone who has passed through the Cow Palace doors knows it is more than just a one hit wonder. Each year countless fans of enumerable different events flock to the Cow Palace each year. With over 50 million fans who have attended these events you are sure to run into someone who has at least one story to share about the iconic “palace for Cows.”

Though cars have replaced cows in many homes around the country, the Cow Palace always returns to it’s western roots when the boots hit the arena for the Grand National!