adminJanuary 1, 2014Adventures from the roadNo comments

(Side note: this did not publish yesterday when it was supposed to) So Monday was Mouse’s first day back after two weeks off. When I texted my trainer after the quote that pretty much sums it up is this “I know I want to be a rodeo queen, but that was more rodeo than I had in mind.”

Our ride consisted of a short jaunt around the block, during which Mouse gave Roo a run for her money as the spunky sister. I decided she felt sound enough, and had too much energy so she needed a little arena work. After a long time working fairly politely at the walk/jog we went to lope off, and all hell broke loose.
We spent the next 30 minutes alternating between bolting and running off bit in teeth, and hoping gracefully around the arena in an effort to unseat me. We never really did manage a civil lope, but baby steps were made, and I didn’t want to hurt her hock more.
After we busted out the rarely used cooler (cause it’s Cali) as Mouse had managed to become drenched in sweat.

Today I spent the majority of my day prepping clothes. Not only does a rodeo queen have to ride, but they have to look good too! Mom and I tag teamed the new blazer, I dyed pants, and shaped hats. The worst part of this whole process is the pants! Matching/dyeing to have these monochromatic outfits is just insanely hard. I managed to nail my red outfit, but my purple missed the mark. Luckily I am right on track with planning, which is good cause it starts in less than a month! I’m sure I’m missing stuff but I’ll catch y’all up as we go along. 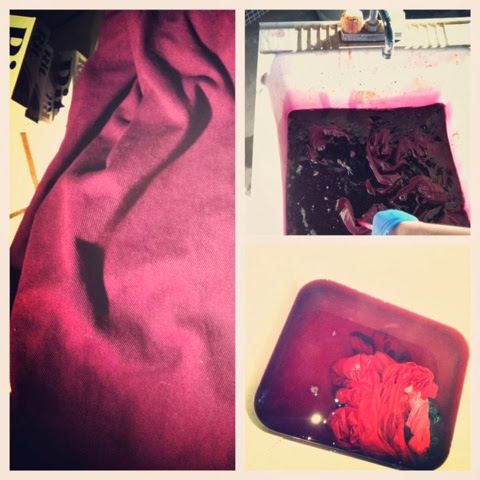