adminJuly 20, 2015Adventures from the roadNo comments
Feel the need the need for speed!!
It’s pretty funny to think that throughout my equestrian career most of my time was spent in the slower end of the saddle. But this past weekend was not one of those times.
This trip was a bit of a different ballgame, everything from the massive Salinas rodeo park, to having my Posse by my side, upped the game! Not only was my family and my posse along for the ride, I was blessed to have a few former queens and contestants too. My spirit animal Miss Mary helped me to truly have the best time hanging out by the fire and making late night ice cream runs.
In true Gold Tour fashion Salinas was the full experience. The rodeo grounds was overwhelming taking up several city blocks and housing more than just a few hours of fun.There were concerts, dances, tradeshows, horse shows and dozens of other events. In addition I had the honor of watching former Mother Lode queen Taylor Howell crowned the 2016 Salinas queen, I am incredibly excited to share the rodeo road with her!
My days each started with a parade, riding alongside my Posse. It was wonderful to see the community’s support of their rodeo. For three days the streets were lined with people to watch as the pageantry passed by.
The parade finished in front of the grandstands on the rodeo grounds. After that I parted ways with my guys to get ready for the big show!
We were all brought to a holding area, and as I waited I looked upon the track. Instead of a simple little oval, or a large stately arena, I was to ride on a true race track!  I was a few girls back and as the rider in front of me left the gate person asked me to go. Dad and I suggested that I hang back, knowing Miss Mouse’s style we figured I would have no trouble catching up.
I gave into her insistence and let my girl go. Seconds later my little rocket was airborne, of course we like to make an entrance and this was no exception.  By the time the announcer saw me I was about to pass the rider in front of me! He didn’t even get a chance to say my name, all I heard was “OH there she goes!”
But we finished in style saluting our way through one of the largest California rodeos. Sadly the weekend ended too soon and I was back on the road headed to work in SF, but I will always leave a little piece of my heart on the Salinas track. 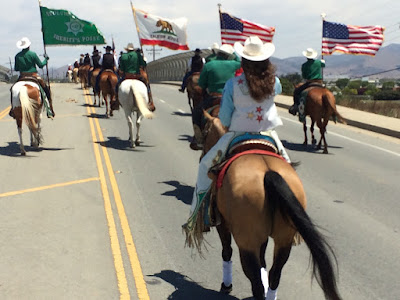