adminAugust 25, 2015Adventures from the roadNo comments

OK maybe I’m exaggerating just a tiny bit.. I mean I would never do that! Anyway I am super excited to finally get to do a SoCal rodeo, my whole life has been spent all over the world, but it is always fun to come back to Southern California, this time it was to ride in the Norco Rodeo.

Norco is a pretty cool town, it’s smack in the middle of LA, the Inland Empire and all of the SoCal crazines. Yet it is probably one of the horsey towns you will ever see, there’s a horse on every postage stamp lot you turn around to.
We decided to take two trailers mine and the big living quarters, and it was lucky we did! Because about halfway into the trip my truck decided to blow a fan belt.  It seems for me truck troubles are the name of Reba’s game but luckily the family was close by and we were saved with little issue
I’ve traveled the road a lot this year with my Black Oak horse trailer but it’s nice every once in a while to have mom and dad’s big Cadillac of a trailer; because air-conditioning, a microwave, and ice cream come in a really handy during 3 long dusty days of rodeo.
Each night was jampacked, Norco has a lot of sponsor flags being that they have a lot of support in that such a horsey community. So not only did I do to queen runs but I also carried several flags a performance.Unfortunately the last performance on my last run I walked out of the arena and Mouse was three legged, I panicked. I’ve ridden horses my whole life and dealt with my fair share of injuries but there something sickening about being right in the middle of an event and knowing that your baby is hurt. But you cowgirl up, I am incredibly blessed that a fellow queen friend Rachel offered up her horse and I was able to finish my run.
We took Miss Mouse home and we think it was just so bruised sole. She and I may be a little dramatic but it never hurts to be safe.  Alls well that ends well! 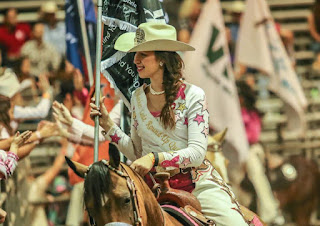