adminOctober 30, 2013Adventures from the roadNo comments

Well after a week of commuting from SF to Stanford via train, Friday arrived all too soon, and not quick enough!

I was fortunate enough to have the day before the contest off work, so I could pull together all the last minute details. From finding missing shirt snaps, to making sure I had my pattern memorized (there might be a theme here).
After a somewhat sleepless night, the day of truth finally arrived! Amazingly enough I woke up on time for once, bright and early at 5 am.
Somewhat to my dismay I fumbled around in the dark, as the rest of my crew missed the alarm clock memo! After managing to dress, saddle my horse, and  find the arena (all sans coffee). I went to work schooling the Princess.
After loosing a foam roller in the arena, and snapping the fender on my good saddle, yes the entire double layered piece of leather that holds my leg in place; I decided we were as ready as we’d ever be.
With the help of my pit crew (Mom, Dad & best friend’s mom Lisa) I was able to get ready and show up early to my interview. (Another shocker)
Though I was pretty nervous, I managed to get through my interview in one piece. Not even getting too rattled when the lights randomly went out! Next was the speeches, and the grand finale, horsemanship.
In the riding portion our pattern went well, with Mighty Mouse living up to her name. I stayed on pattern and even made the judge smile in my question session.
The flag run following was less seemless. We managed to put on a very clean showy run, however when we got to the end, Mouse decided she wasn’t done showing off!
After the class mom said that I used my last corner well. I told her I figured Mouse would either slide stop or jump the fence.
Luckily she stopped and all in all it went pretty good.  After the riding I had to spend 3 grueling hours waiting for the final results. Probably the greatest part of the whole contest was the grand entry.

Just before the results were announced we entered the arena one at a time and completed a queen’s run (also known as tearing around the arena a billion miles an hour while waving at the crowd). I decieded that for this it was best to use my trusty old rodeo horse who had been in a performance or twenty. Boy was I glad I did, from flags, screaming, spotlights, and loose bulls. Old Parker didn’t bat an eye, galloping around the rail and coming neatly to a stop, all while I was trying to keep my head from spinnning.

Though the results didn’t end up quite as I’d hoped. I was 4th overall, but I did manage to score a 2nd in the riding and 3rd in the speech (I think that’s right, honestly it was all a blur). Regardless of the final scores I got something better than a crown. I gained a week and a half of memories and the chance to ride in front of thousands in a historic California landmark.

Since the contest my new queen friends and a few old ones, are trying to convince me to run for another title! I am not sure weather I am ready to ride that crazy train just yet, but I wouldn’t change what I did for anything in the world. 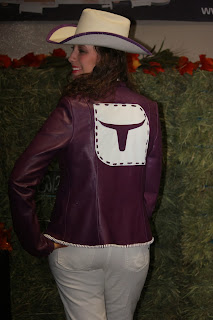 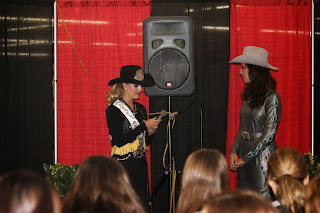 Giving my speech with the 2013 Miss GNR. 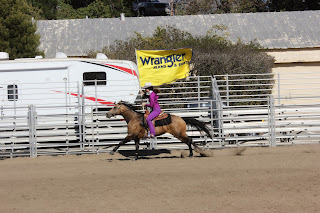 Attempting to carry a flag in a snaffle. 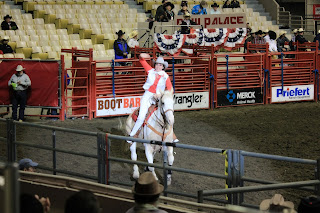