Well just when you think one thing, the world goes and proves you wrong. The last time I wrote I had just finished the Oakdale Rodeo weekend, which I dubbed the best weekend of the rodeo season, boy howdy was I wrong.

Following Oakdake the schedule brought us to sponsors lunch and another Coyote Sam event. And before I knew it the contest was here!
We started our competition by turning in the tickets we needed to qualify  and taking our written test. The following morning I was up at 4 am to get ready for a contestant radio interview.
Saturday was the most important part (well to me anyway) the horsemanship! I arrived early to school, and Mouse was stunning. But as soon as the locked the alley to begin 2 busy hours of events my calm little cookie changed, and put her sassy pants on.
We made it through all the events with no major issues. But it was not a walk in the park, I had to ride my tail off! After we headed to my own personal kryptonite the interview. Luckily it ended up far less painful than any interview before. 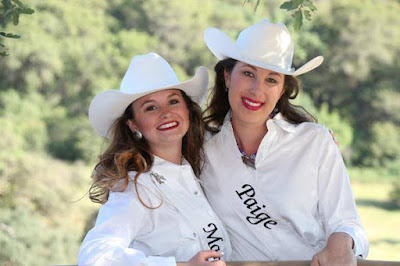 The following day was the big kahuna, coronation. Bright and early we met to practice the schedule of events and get comfortable with the venue.
Then it was off to dress and return for the show. One line dance, two killer speeches and 4 clothing changes later we were nervously standing on stage with hundreds watching us.
Several categories were announced and my friend Mary began to accumulate a pile of prizes. Next I was announced as the winner of the photogenic category, a pretty exciting thing to hear considering the effort put into my wild themed shoot.
Following that another contestant was announced for numerous awards in a row. I wasn’t too worried because they were categories I was weak in.
Then the horsemanship winner was up, here I was nervous, I didn’t feel rock solid about my previous day’s rides. But to my amazement I was announced as winner.
Inside my head I kept thinking I won the one I wanted I can now walk away happy. Second runner up was announced, and I was shocked to hear it was the same girl as last year.
At that point I was sure that my friend Mary would be queen and I once again would be first runner up, which is still an admirable accomplishment.
But to my disbelief Mary was announced as first runner up. She immediately grabbed me in excitement as I stood there dumbfounded.
I had won.
As I was pushed forward and my new crown put on my head I continued to say, “is this real?”
Since then I have been pedal to the metal. With all sorts of things that will need to have their own post. So hang right with me as I introduce you to my new journey as the 2015 Motherlode RoundUp Queen. 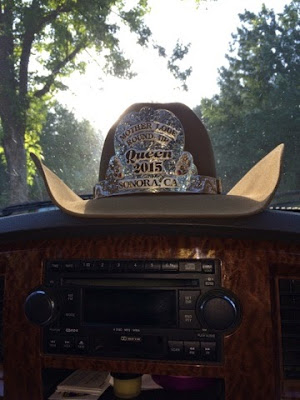